They were subtle at first,

“What if this happens?”

“What will they think?”

“Will I hurt their feelings?”

Slowly through my early teens these questions got bigger and louder. So much so that I was plagued with a debilitating state of anxiety attacks and fears of the world around me. Talk therapy helped, slightly, although the underlying anxiety never fully subsided. In retrospect, fear was the dominant emotion driving many of my life choices throughout my young adulthood.

In college, my roommate and I decided to take a Tai Chi class. The odd slow rhythmic movement was soothing. One day as I sat on the floor in class I suddenly felt as if an elephant was sitting on my shoulders. I was being pushed over and had no way to push back. I opened my eyes to see what was happening. Above me the instructor was hovering his hands a few inches over my shoulders pushing down. He was using energy to physically move me. My mind was blown. Days later he asked several of us to form a line. As he moved his hands and pushed energy through us, I was the last in the line and fell over. Though deeply impacted by the power of that experience, like many young adults I buried it beneath other “more important” things and went on as I had for years before and years after.

I went on in my life as is to be expected my anxiety returned, with a vengeance and with full blown depression. I returned to talk therapy and started medication, both of which saved my life – literally. Though an important and necessary lifeline, I needed more than these traditional approaches were offering me. 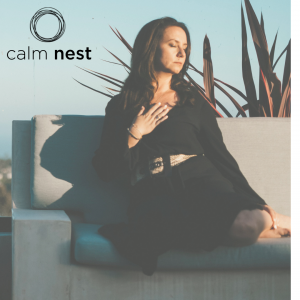 I began exploring what else was available to me in the process of healing my body and mind. I experienced a craniosacral massage which is supposed to move the energy through your body. Within minutes of the massage ending, I felt gas exiting my mouth like I was a character in Ghostbusters.

I held crystals, admiring their beauty and feeling a metal taste in my mouth with certain ones.

My first reiki session blew my mind. I spent the hour feeling as if someone wrapped a corset around my organs, squeezing them as tightly as possible. It felt oddly comforting and detoxing. When I spoke with my reiki practitioner after the session, she said that she was called to infuse positive energy into each of my cells and that is exactly what it felt like.

A few weeks after my reiki session, I tried a breathwork class. This was a few months after my father was unexpectedly diagnosed with stage 4 cancer. My lower back was aching, and I needed something to help me process the news of his illness. A breathwork class sounded nice. After an hour of guided and focused breathing, I began to sob, releasing all the stress and worry from my body. When I spoke with the instructor, he shared with me that he was not surprised. All the “what ifs”, the anxiety, the worry were stuck in my body and the breathwork class helped move them out, right along with my back pain.

Then came the forks – biofield tuning. When your good friend tells you that she learned about the human biofield and the energy it holds, you beg her to do a session on you. Heat, sweating, sobbing, squeezing – all unsolicited by me, but a result of the imprint of my energetic history and the frequency disturbance it left behind.

With each of these independent experiences I felt the “what if” voice fade further away. With each release I experienced further confirmation that energy healing is real and it was working for me in tangible ways.

As my family, like many others, retreated into our home beginning in March 2020,  I lost my way to experience the healing and personal growth attainable from energy practitioners. Like a beam of light in a storm I received an email, Virtual energy healing – become a reiki practitioner online. As with all energy and the world, things come to us just at the right time if we are present enough to see them. This was my chance to see behind the curtain and experience the practitioner side of the impactful experiences I had experienced. I became certified and my friends where my willing guinea pigs. While keeping everyone’s expectations low, time after time, physical manifestation of energy movement took place, vibrating colors were seen, pain release was felt, emotional trauma was addressed, and positive energy was regained.

A year and a half ago I lost my mother to cancer. Her experience reinforced my deep devotion to self care and checking in with my body. That pivotal life experience was followed by the manifestation of calm nest.

I have never felt more myself than I do at this moment. I invite you to join me in this feeling.

“One day you will tell your story of how you overcame what you went through, and it will become someone else’s survival guide.”

Any cookies that may not be particularly necessary for the website to function and is used specifically to collect user personal data via analytics, ads, other embedded contents are termed as non-necessary cookies. It is mandatory to procure user consent prior to running these cookies on your website.